Will Gavin Newsom Stand With Workers? 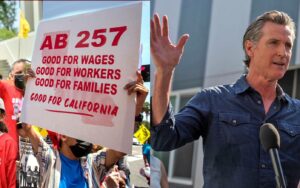 California Assembly Bill 257, known as the FAST Recovery Act, is legislation that establishes a new state council with the power to set new working standards for wages, hours, and working conditions for fast food restaurants across California. More than half a million fast food employees in California, mostly Latino and Black, could see an improvement in working conditions with the passing of AB 257.

This week, the bill narrowly passed the State Senate. All eyes are watching if California Governor Gavin Newsom, who many believe has presidential ambitions, signs the bill when it hits his desk.

Many important provisions were stripped of the bill on August 25th, but it remains a hotly controversial bill.

Concurrent to the passing of the FAST Recovery Act, is AB 2183 which allows farm workers the right to form a union without fear of intimidation or deportation. Newsom has publicly expressed his lack of support for this bill.

The California Labor Federation, Service Employees International Union, and Fight For $15 are advocating hard for both bills. In the past few weeks, they have staged massive marches and sit-ins at the Capitol in Sacramento in support of AB 257 and AB 2183.

These legislative actions are happening in a period of increased labor activism. 71% of Americans approve of labor unions, according to Gallup. This is an increase of 23% since 2008 and is now the highest rate since 1965.

“A tight labor market has shifted some bargaining power back to workers, while the experience of toiling through a pandemic has made many workers more interested in bargaining collectively” says Liz Shuler, president of the AFL-CIO labor federation.